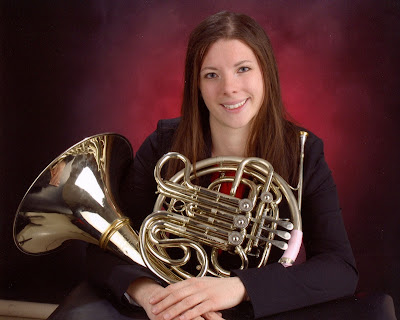 From Adams to Mozart and Britten to Wagner, Erika Binsley is an enthusiastic performer of music old and new.  She has been heard around the world as a soloist, chamber musician, and orchestral horn player.  Miss Binsley has shared the stage with artists such as John Williams and Michael Tilson-Thomas and performed in venues including Carnegie Hall, Walt Disney Concert Hall, New World Center, and Shanghai Concert Hall.  During the summer, Erika has participated in the Aspen Music Festival, Banff Summer Festival, CCM Spoleto Festival (in Italy), and Idyllwild Summer Festival Orchestra.  She has been the recipient of many awards including the ASCAP Livingston and Evans Scholarship, First Place in the Claremont Winds Young Artists Competition, Low Horn Winner of the IHS Dorothy Frizelle Orchestra Audition Contest, and a Trustee Scholarship (full tuition) to the University of Southern California, where she graduated Magna Cum Laude.  While at USC, Miss Binsley was also a member of the YMF Debut Orchestra.  Currently, Erika plays in the Wichita Symphony and is a graduate assistant at Wichita State University.
Newer Post Older Post Home

Recital at Ulrich Museum of Art

Music from the Americas